The 71st Primetime Emmy Awards are done and I feel like a freaking psychic. I’m personally very pleased with the 2019 Emmys awards and my predictions. Let me tell you more about my favorite moments from the event.

Fleabag deserved them all and I’m so happy that Phoebe Waller-Bridge is being recognized for her spectacular talent. If you haven’t watched it by now, I and many others encourage you to do so. You’re not gonna regret that. 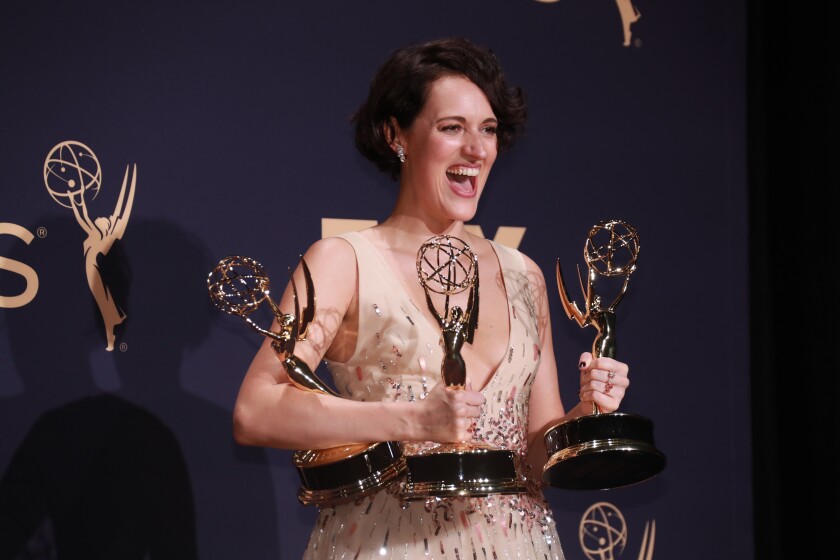 Speaking of a talented woman, how great was Jodie Comer in Killing Eve?

Her surprise of winning Outstanding Lead Actress in a Drama Series in such a tough category was endearing. She was among great names like Viola Davis, Emilia Clarke, or Sandra Oh, her Killing Eve costar with whom she shared a sweet moment before her speech. Loved this duo and I felt odd to have both women compete in the same category. Sandra Oh was incredible but Jodie and her character were truly outstanding. Villanelle is an unforgettably fascinating character.

This award could have easily gone to Emilia Clarke for her role as Daenerys. Basically, any actor from Game of thrones deserves an award for dedicating so much of their life to this show. Thankfully at least Peter Dinklage won an award for Outstanding Supporting Actor in a Drama Series.

We are so close to never hearing about the Game of thrones or at least the original series ever. It’s been a couple of months since the final season ended and I am still not over it. My many thoughts on GOT are listed on my GOT page.

I like Emilia Clark’s response to the critique of the Game of Thrones ending:

“You know what? It was profoundly flattering. When someone cares that much that they are ready to make such a noise about it. About how they believe the character should have been finished and how the story should have gone. That’s just enormously flattering.”

And the game of thrones fans are nothing if not passionate.

It’s kind of ironic how lots of people are glad that this season didn’t win any awards, as it truly did not deserve one for the season they shared.

Game of thrones did win Outstanding Drama Series, but I personally feel like it’s an award for all of the years GOT has been on in general. As a show it is outstanding. No arguing there. Like a season it’s bullshit in comparison with for example Killing Eve from the same category.

Except for Fleabag kicking ass, my top moment of the 2019 Emmys got to be Gwendoline Christie’s outfit.

Speaking of beautiful outfits, the 2019 Emmys were held in the spirit of colors and free titties.

I mean it in the best way possible. Overalls, pastel white colors, deep necklines, and most importantly no bras were seen at the event whatsoever. Loving it.

I would give an award to HBO for great management. I don’t know if it was intentional or it sort of happened but I just want to point out that HBO’s Chernobyl miniseries came in just perfect time.

It was right when already mentioned failing Game of Thrones was coming to its bitter end and many fans including me were planning to cancel their HBO membership.

Then Chernobyl happened and HBO got us hooked for a while longer.

Chernobyl is an incredible show and deserves the awards it won. I was sure of it when I saw the first episode and I am sure of it now. Chernobyl is now the proud owner of second-most awards from the 2019 Emmys:

Emmys 2019 and the responses all over the internet radiates love for Bill Harder and I’ve got a confession to make. I haven’t seen Barry, the show for which Bill won Outstanding Comedy Actor, yet. The recent hype around Bill makes me want to change it very soon though.

Last Week Tonight with John Oliver is like the only talk show I ever watch. By watch I mean play clips on youtube in my free time. Love his satiric, on-point vents so much, love and identify with his opinions and I’m constantly astonished by his power of speech. I’m gonna be honest I literally forgot this show is actually considered a show so could be nominated for an Emmy. To my pleasant surprise, I was reminded of that when I learned that Last week tonight with John Oliver won not one but 2 Emmys:

Once again I was convinced of my good taste regarding tv shows. Gonna keep with my good work of watching them, for the years to come.